Triclosan: What it is and why You Should Avoid It 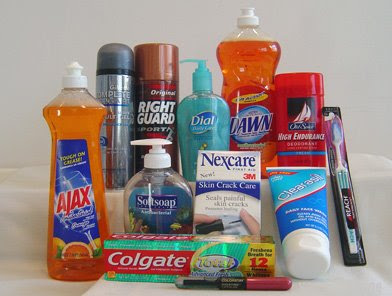 Reports have suggested that triclosan can combine with chlorine in tap water to form chloroform gas,[16] which the United States Environmental Protection Agency classifies as a probable human carcinogen.

As a result, triclosan was the target of a UK cancer alert, even though the study showed that the amount of chloroform generated was less than amounts often present in chlorinated drinking waters.
Triclosan reacts with the free chlorine in tap water to also produce lesser amounts of other compounds, like 2,4-dichlorophenol.[16] Most of these intermediates convert into dioxins upon exposure to UV radiation (from the sun or other sources). Although small amounts of dioxins are produced, there is a great deal of concern over this effect because some dioxins are extremely toxic and are very potent endocrine disruptors. They are also chemically very stable, so that they are eliminated from the body very slowly (they can bioaccumulate to dangerous levels), and they persist in the environment for a very long time. However, dioxin is not one compound, but a family of compounds of widely ranging toxicity. The dioxin compound that formed when triclosan degraded in sunlight is not a dioxin of public health concern.
Triclosan is chemically somewhat similar to the dioxin class of compounds. Its production leads to small amounts of residual polychlorinated dioxins, and polychlorinated furans which are contained in small amounts, in the products that are using it.
A 2006 study concluded that low doses of triclosan act as an endocrine disruptor in the North American bullfrog.[17] The hypothesis proposed is that triclosan blocks the metabolism of thyroid hormone, because it chemically mimics thyroid hormone, and binds to the hormone receptor sites, blocking them, so that normal hormones cannot be utilized. Triclosan has also been found in both the bile of fish living downstream from waste water processing plants and in human breast milk.[18]
The negative effects of Triclosan on the environment and its questionable benefits in toothpastes[19] has led to the Swedish Naturskyddsföreningen to recommend not using triclosan in toothpaste.[20]
Triclosan is used in many common household products including Clearasil Daily Face Wash, Dentyl mouthwash, Dawn, the Colgate Total range, Crest Cavity Protection, Softsoap, Dial, Right Guard deodorant, Sensodyne Total Care, Old Spice and Mentadent. At this time, in the United States, manufacturers of products containing triclosan must say so somewhere on the label.
The ADA (American Dental Association) published a response to the concerns stemming from the Virginia Tech study stating that Triclosan in toothpaste is not relevant.

In one study, recently accepted for publication in the journal Environmental Health Perspectives and made available online, Isaac Pessah, PhD, director of the U.C. Davis Children’s Center for Environmental Health, looked at how triclosan may affect the brain. Pessah’s test-tube study found that the chemical attached itself to special “receptor” molecules on the surface of cells. This raises calcium levels inside the cell. Cells overloaded with calcium get overexcited. In the brain, these overexcited cells may burn out neural circuits, which could lead to an imbalance that affects mental development. Some people may carry a mutated gene that makes it easier for triclosan to attach to their cells. That could make them more vulnerable to any effects triclosan may cause.[21]

Learn more from these Articles
Data results on Triclosan from Skin Deep:

Antibacterial soap ingredient triclosan may be harmful to humans http://www.naturalnews.com/021703.html

A note from Amy
ALL YOU NEED TO PROPERLY WASH YOUR HANDS IS PLAIN SOAP AND WATER.

AFTER CHECKING YOUR HAND / DISH SOAP LABELS FOR THIS NASTY CHEMICAL, TAKE A LOOK AT THE COLOR OF THE SOAP… IF IT’S BRIGHT RED, ORANGE, BLUE, YELLOW, PUT IT BACK ON THE SHELF. THOSE COLORS ARE FROM FD&C DYES (ORIGINATED FROM COAL TAR) AND ARE NASTY TO OUR ECOSYSTEM AND TO YOUR CHILDREN’S BEHAVIOR PATTERNS.
COMMERCIAL BAR SOAPS CONTAIN TALLOWATE, WHICH IS SLAUGHTERED ANIMAL FAT, WHICH MOST LIKELY INJECTED WITH HORMONES (BIG SURPRISE) AND NOT SOMETHING YOU WANT TO PUT ON YOUR SKIN.
BUY A GALLON OF DOCTOR BRONNER’S CASTILE SOAP AND PUT IN FUN LITTLE PUMP JARS AND PLACE OVER THE HOME, GIVE TO FRIENDS. DR. BRONNER’S SOAPS ARE FOUND IN MOST HEALTH FOOD STORES, WEGMANS AND ONLINE: http://www.DRBRONNER.com/
PURCHASE YOUR SOAP FROM LOCAL SOAP MAKERS (FOUND AT YOUR LOCAL FARMER’S MARKET), MOST OF THEM USE GENTLE INGREDIENTS LIKE GOATS MILK, CALENDULA, OATMEAL AND HERBS.
YOUNG LIVING’S THIEVES FOAMING HAND SOAP ALONG WITH ANY OF THEIR BAR SOAPS ARE VERY NICE ALTERNATIVES.
Amy

The Benefits of Dandelions

Must be redeemed 3 months from purchase date.  Office visits only.